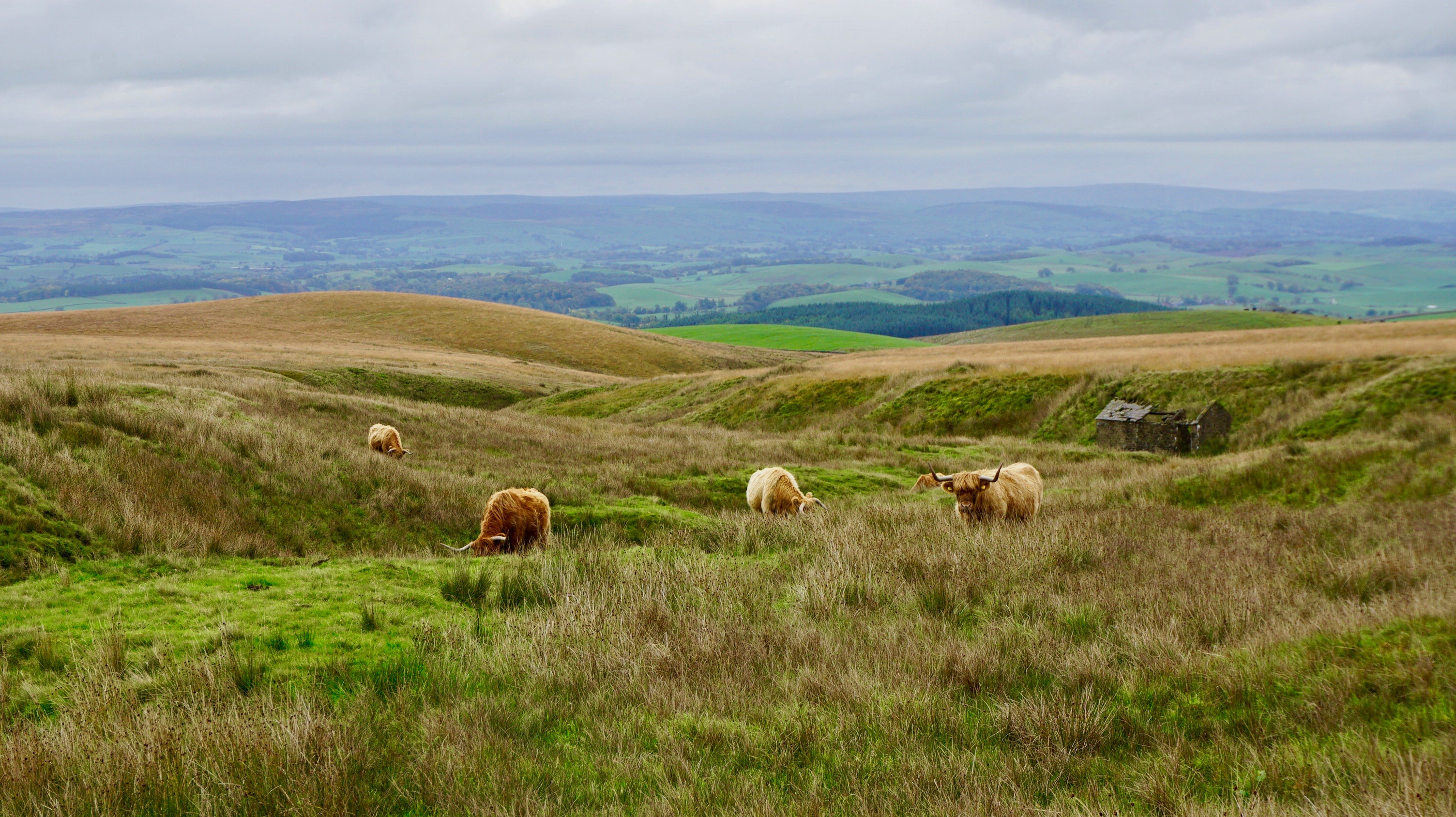 After leaving Manchester we drove through Lake District National Park up to Scotland. The National Park we passed – and spent one day and night – was impressive. First of all, the weather was really nice so that we could even sit and eat outside the car. Second, the nature was breathtaking. Again, a nice hike with a great view in the end. 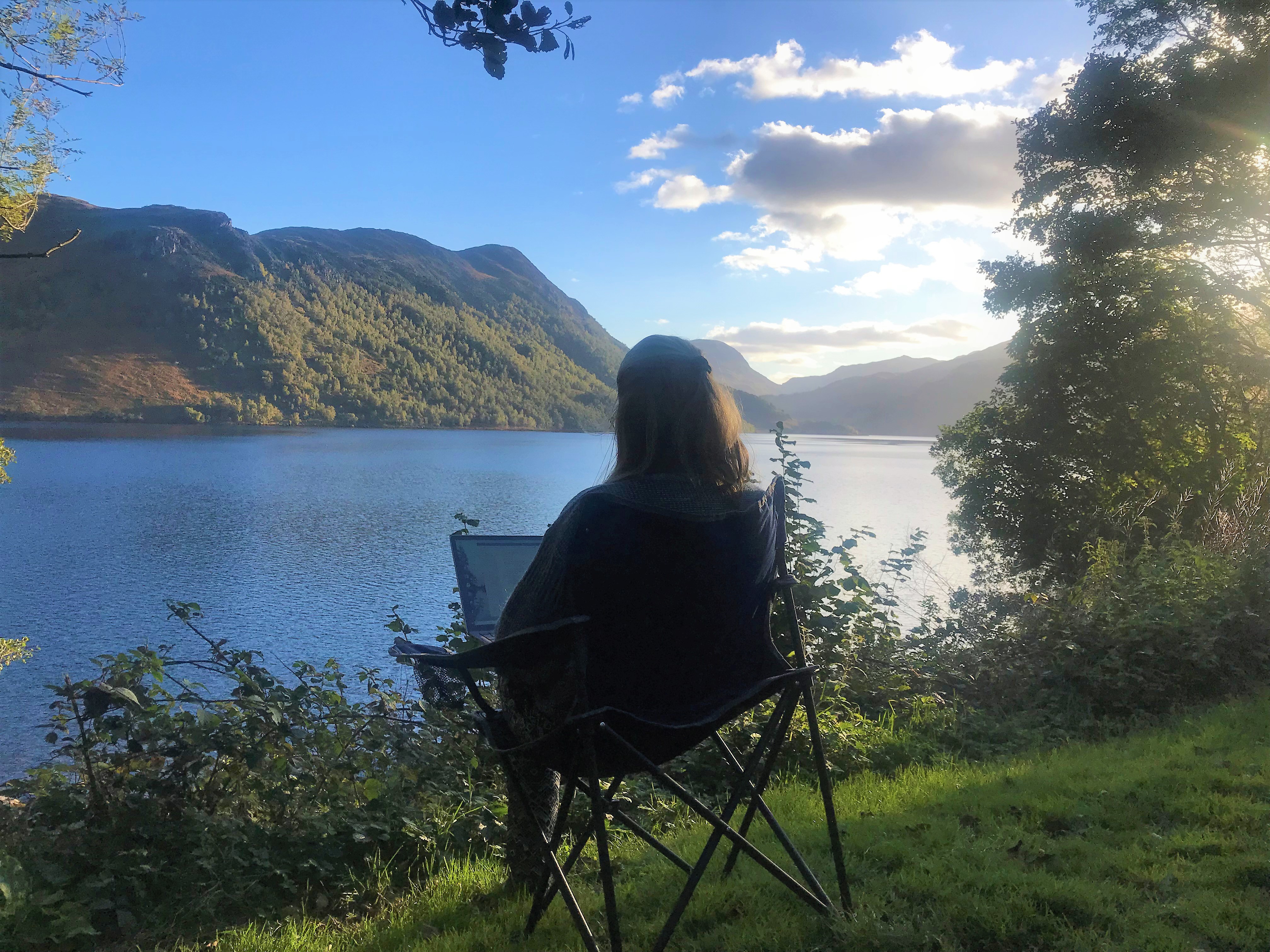 Writing a blog article outside. 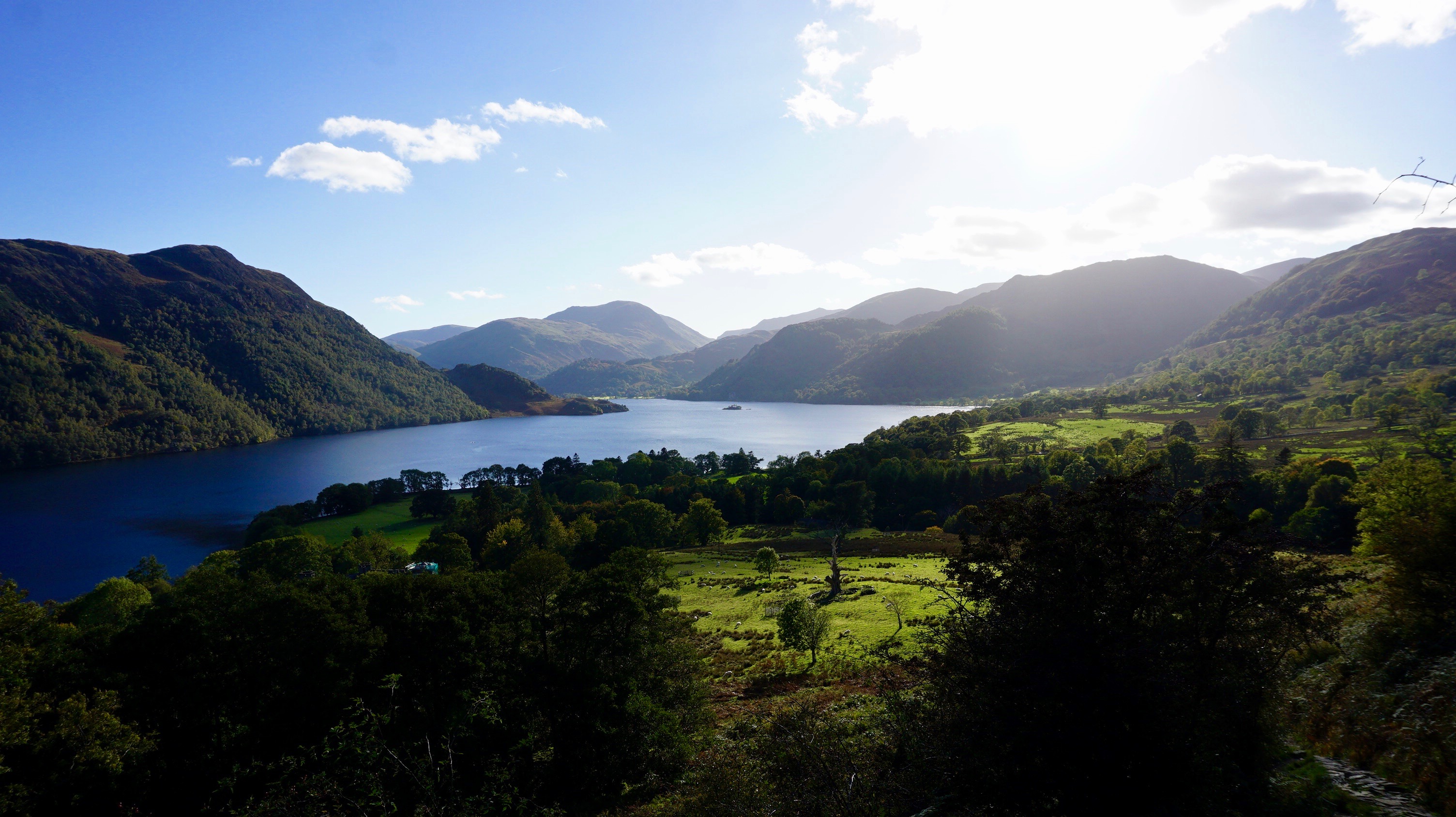 View from Mount Gowbarrow after passing the waterfall Aira Force.

Coming back from the little hike, I met Tim in the van who was searching for our interview equipment. Tripod, smartphone microphones, his phone. Felix was still out and about with the camera. We needed to improvise. So, he took my phone for recording Nick’s tone and his phone for filming.

How did all of this even happen? He told me afterwards. After playing his guitar, Tim started a conversation with the married, English couple who just parked their camper van next to ours to enjoy the view on Ullswater. Funnily, they converted a Ford on their own into a camper van just recently – for themselves and their three teenaged kids, they left them at home for this weekend. So, there was a lot to talk about. One led to another. Tim told them about our project while drinking tea and eating cookies together. Nick was willing to speak about his opinion towards the EU and Brexit in front of the camera – Thanks! They were really nice people who showed us their van (great outcome with some brilliant ideas, e.g. they used a jam pan as a sink) and were also interested in seeing what we built. Always nice to meet friendly and interesting people on the road.

Arriving in Scotland the other day, the weather turned bad. But, not for too long. One day we had to stay inside the van pretty much all day long. But it was kind of cozy. We were relaxing, watching series, drinking tea, talking, eating. And so, the day passed. Even in van-life you need a “Sunday” every now and then.

Scottish Highland cattles next to our sleeping spot.

In general, we spend most of the time somewhere remote, in nature. This is where living in a van feels decelerated. There is no hectic around you. Sometimes Water. Trees. Meadow. Not too many other people. Places, where you can just enjoy the peace and silence. Van-life is just much more relaxing and easier somewhere off main spots.

Anyways, Edinburgh was a city we passed and were interested in visiting. So, we stopped for a few hours to walk up a hill to enjoy the view over the city: 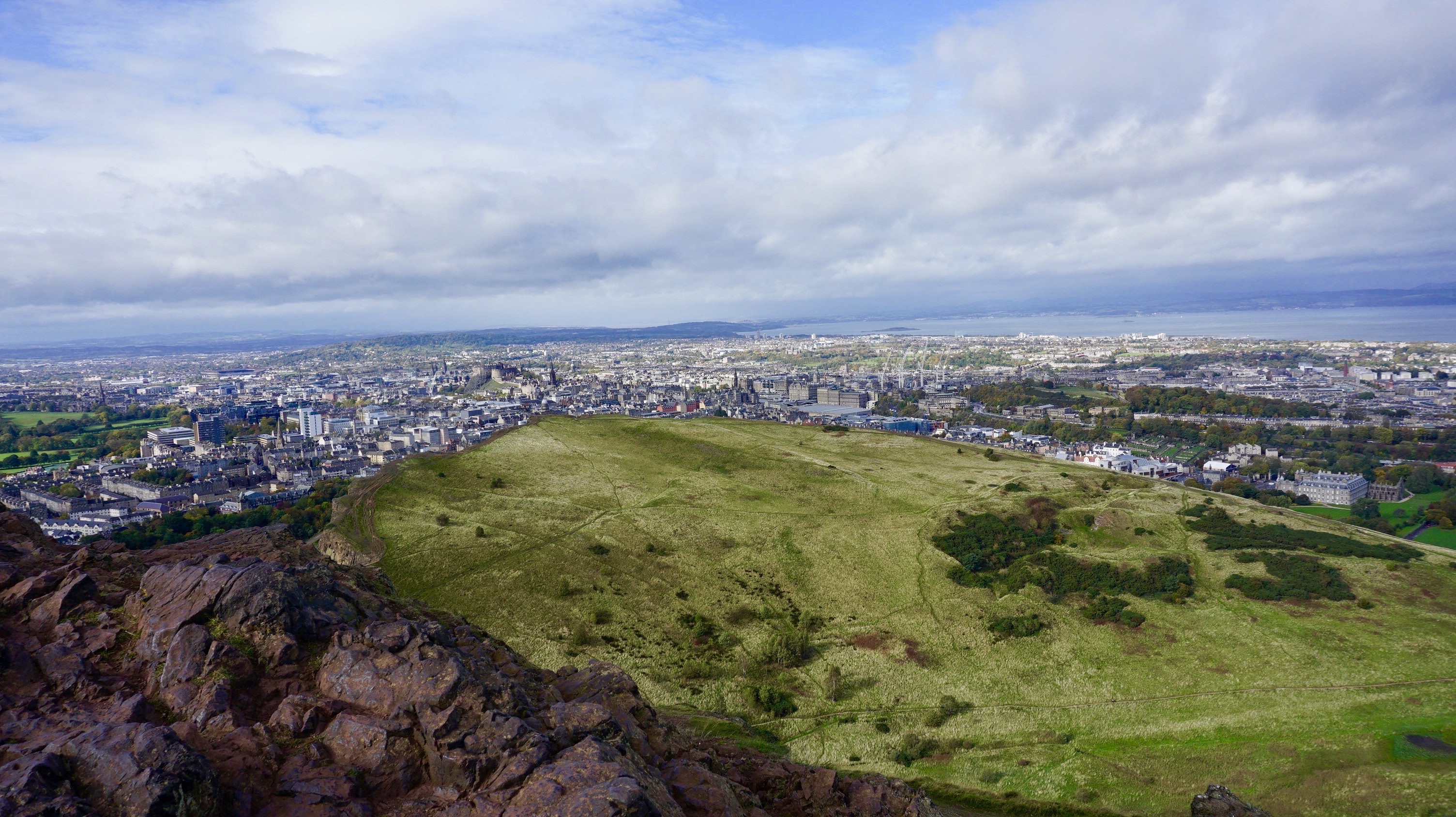 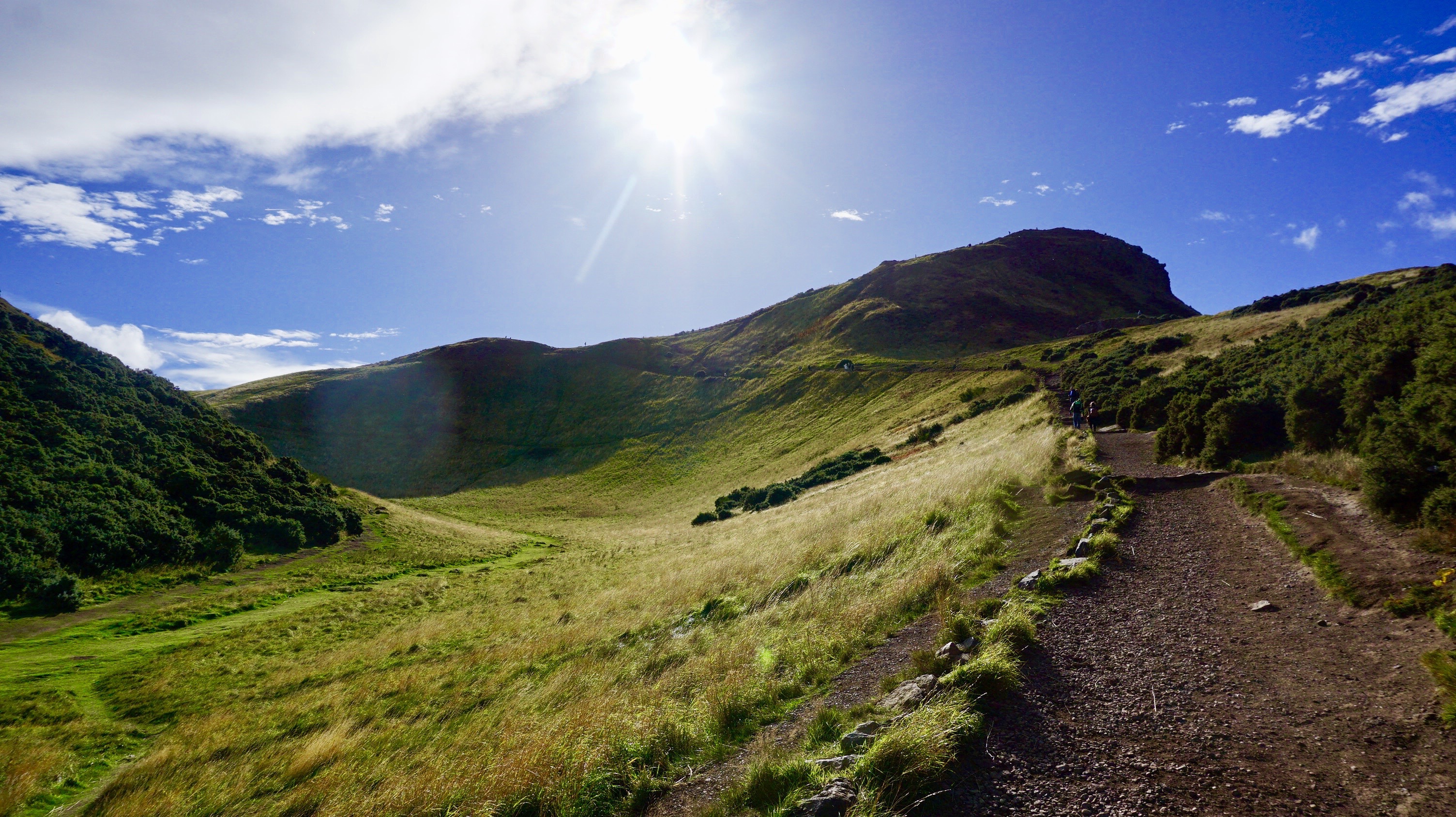 Furthermore, we walked through the city center, visited the university there (to also use some WIFI – thanks to eduroam, the same network in universities all over Europe!) and I got some wool since I thought about starting to learn knitting on our tour. Our impression of Edinburgh: Very young and hip city, definitely worth a stop for having a good time with open people around!

Enough city for us so far. We drove further Nord. And the weather? Amazing! Sunshine and nearly 20 degrees Celsius. We did expect a lot. Except, such a beautiful fall in Great Britain. For us, it’s great to enjoy these amazing landscapes with great weather. But knowing that this is partly due to climate change is a bit shocking.

This is the route we took from Manchester to the Scottish Highlands: