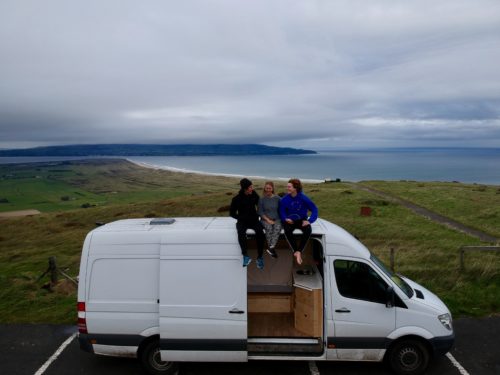 Northern Ireland is a small country, belongs to the United Kingdom, not to Great Britain. That’s what we’ve learned. We did not know much about Northern Ireland before we were visiting, but now we know: worth a visit! The nature and all the cliffs are really impressive and the people mostly friendly.

Let’s give you some more details about our stay. At first, I want to tell you about what we saw and did in Northern Ireland. With some pictures, I’m sure we can convince you to go somewhen – even though they might leave the EU soon. We stayed for four days only which is not too long, but we have the feeling, we saw pretty much of the country. Afterwards I’d like to give you a closer impression of the people we met and talked to, since it was super interesting for us.

In the middle of the night (Wednesday to Thursday) we took a ferry from Cairnryan in Scotland to Larne in Northern Ireland. After a two-hour ferry ride, we arrived in the total dark, really tired. Thanks to the app Park4Night we already knew where to drive to have a decent spot to stay overnight. As the sun was rising the next day, we realized that, again, we were welcomed with a blue sky and sunshine. As we found out before, the thing to do in Northern Ireland is the Causeway Coastal Route. So, we started driving. The coast definitely is breathtaking, especially with sunshine. We stopped at Torr Head, the closest spot in Northern Ireland to Great Britain. We walked up a little hill and found this view: 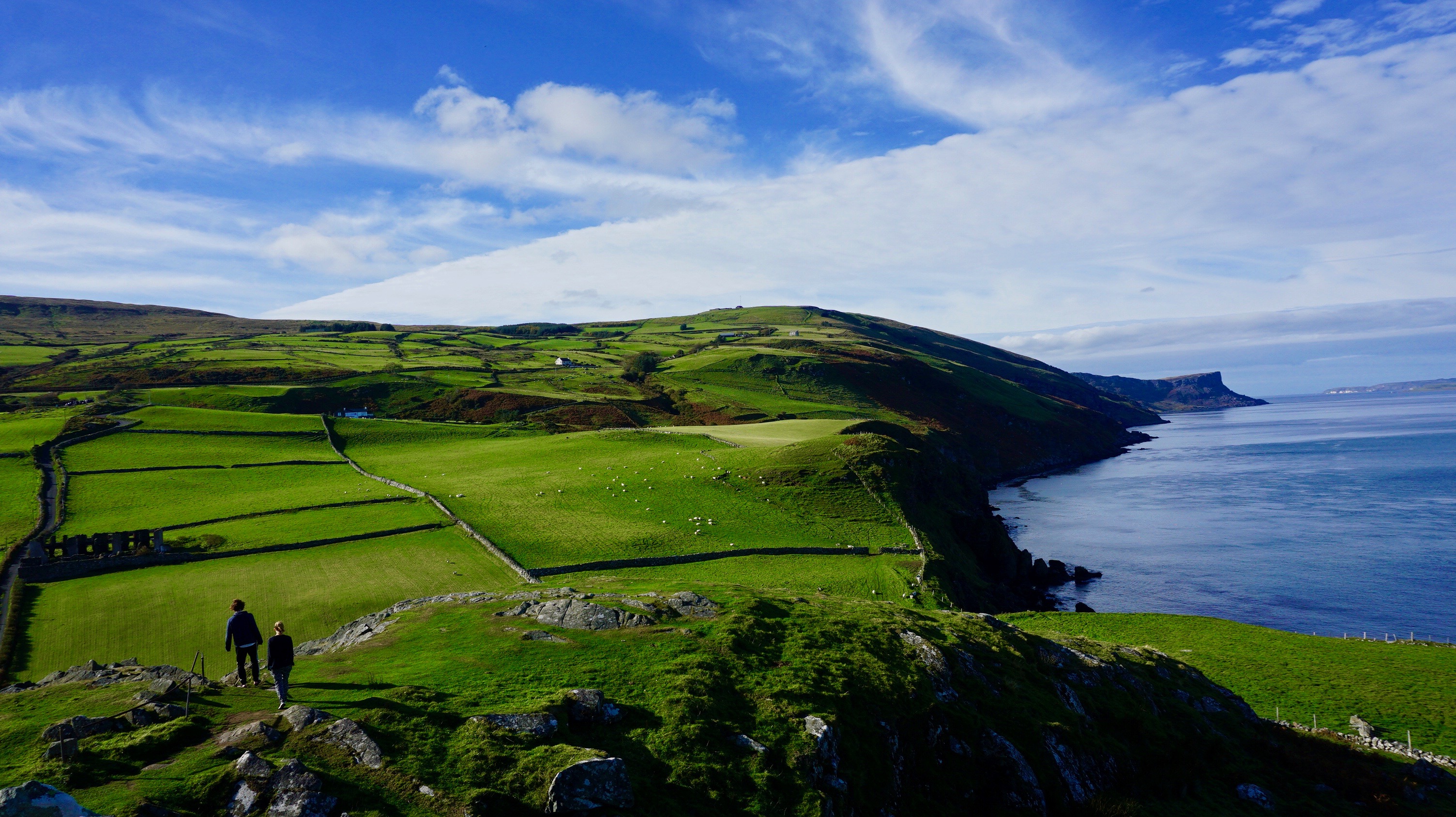 We drove on, next to the cliffs. At a nice parking spot with access to the sea, we stopped for a late lunch, for washing ourselves and taking a little walk. 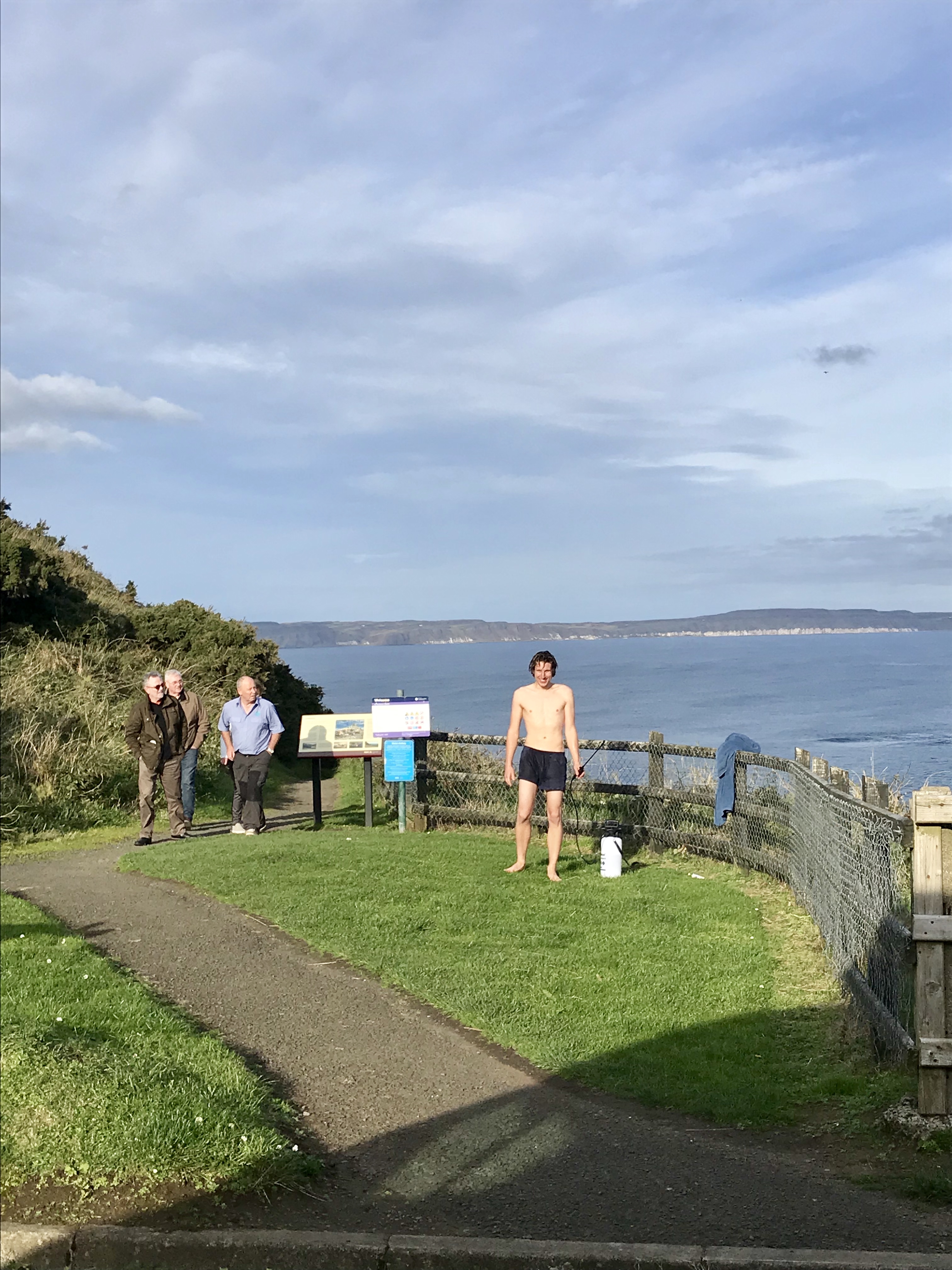 When showering makes you a tourist attraction. 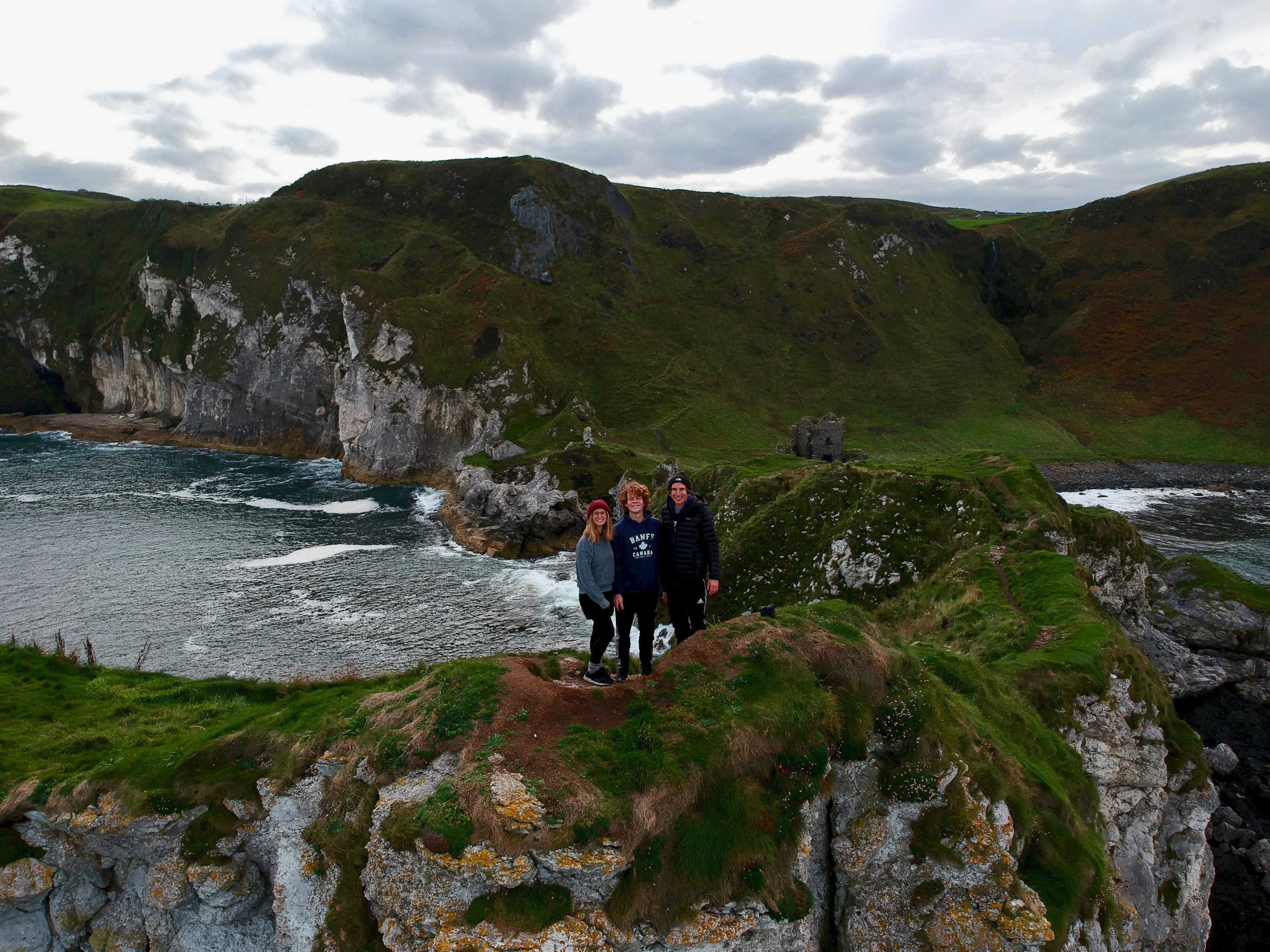 The nature in Northern Ireland is incredibly nice. Us, right in the middle of it.

We met two really nice Germans who were on vacation in Northern Ireland. They gave us some recommendations for our further stay in the UK. So, we decided to drive a little further that day to see the Giant’s Causeway before sunset. We needed to hurry but it was worth it. Giant’s Causeway is an UNESCO World Heritage Site – the only one in Northern Ireland. Indeed, it is impressive, and we are glad we went there to see it. But during the day it costs over 10 pounds to go and see it, don’t know if it is worth that much money. In the mornings and evenings, you can just enter for free which seems a bit weird, but it is legal, and I would recommend that for everyone who’s traveling there. Besides it’s free, it looks pretty impressive with the setting sun in the background. 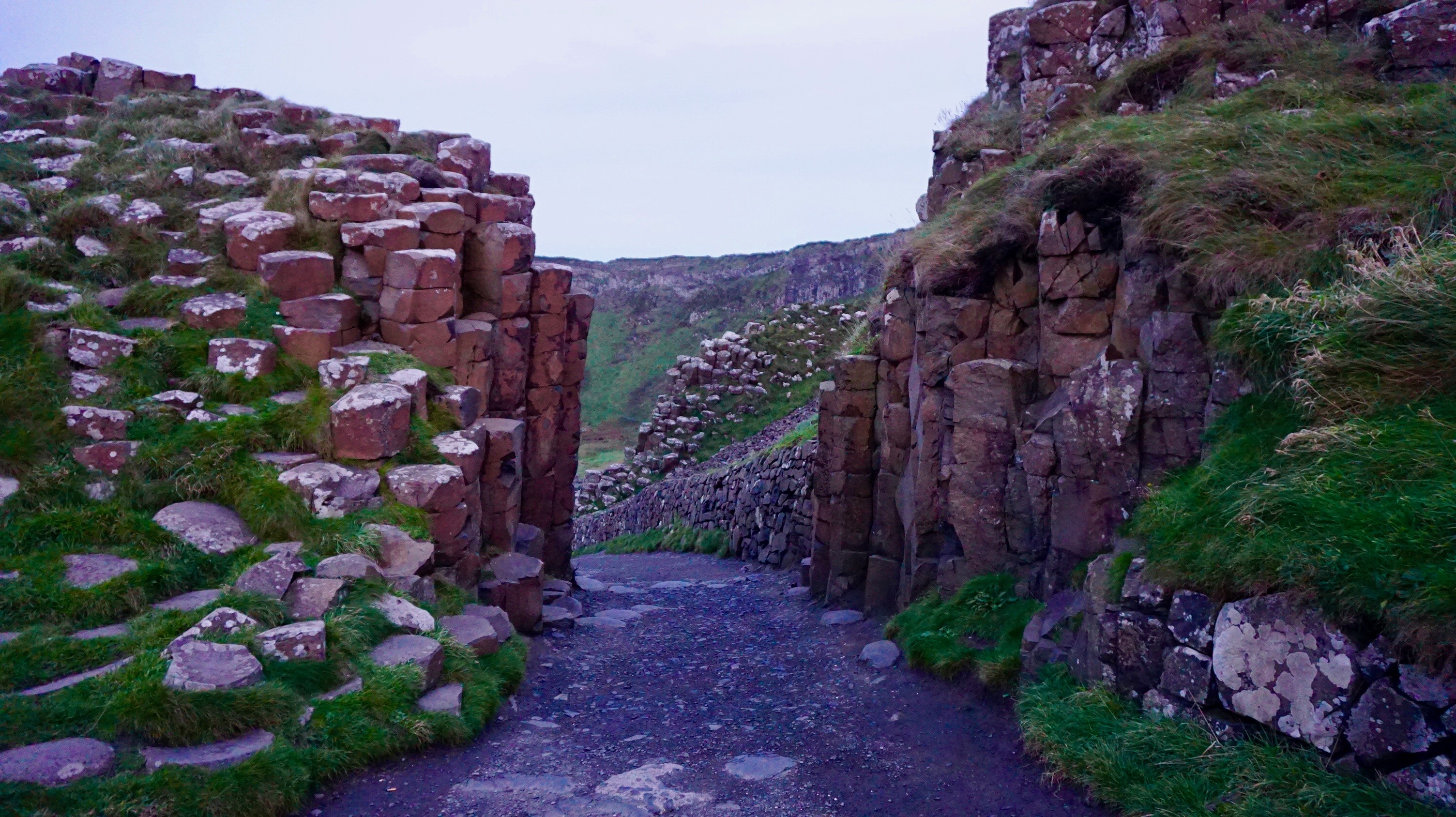 The next day, not too many things happened. But definitely a highlight: We found warm showers, for free! How can something like that happen? Public showers at Benone Beach with only warm water. It felt incredibly good. The three of us took nice and long showers to start into the day. Afterwards, we drove up a hill with a view over Benone Beach and spent the rest of the day here. Everybody had some things to do – sorting pictures, gaining new knowledge with cutting programs and writing and updating the blog. In the evening, another highlight: We ate burgers. A ton of work if – as in our case – you make your own burger patties with only ingredients you find in your van. Anyways, they turned out delicious and so many that we had food for three meals.

The next morning, it was time to take new pictures with Oswald and us. The outcome: 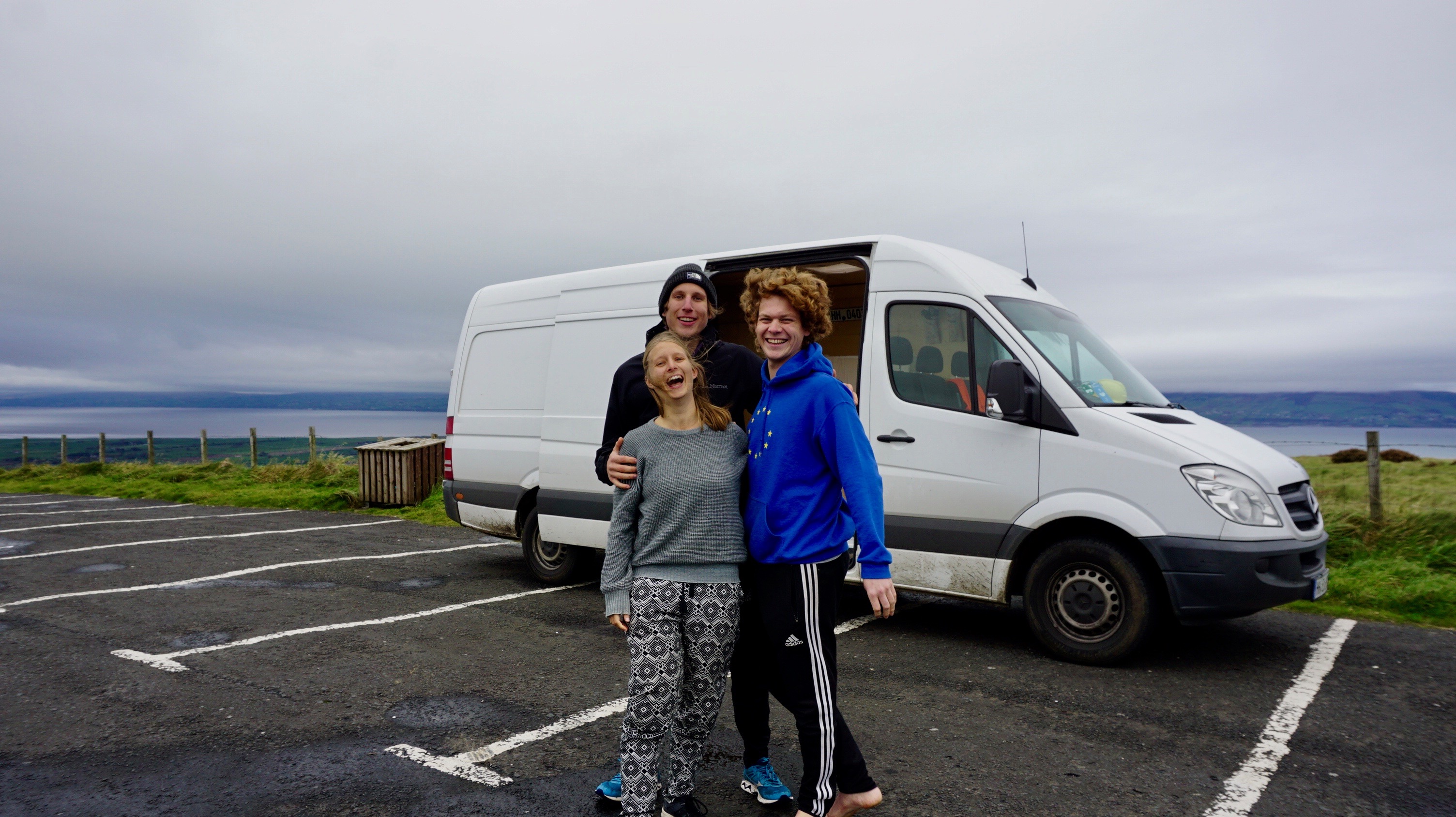 Family picture: One of the funny ones. 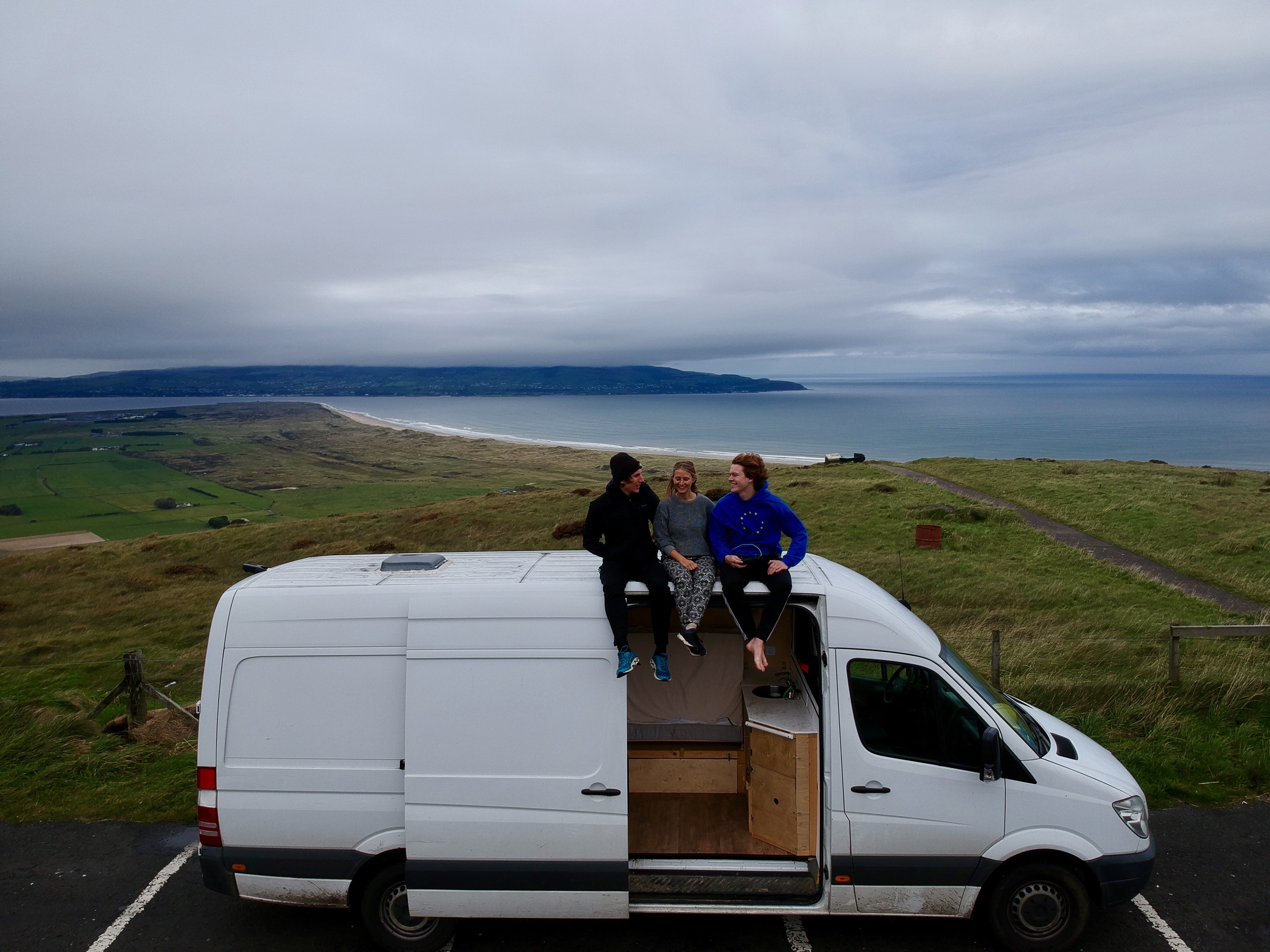 Family picture: Chilling on our rooftop.

Afterwards, we drove a little closer to the Irish boarder. Our goal for the day: find people for interviews. We thought, Northern Irelander would give some real interesting insights about the whole Brexit debate, since the struggle about the boarder between Ireland and Northern Ireland is a big deal. We were really interested in what people, who are affected directly by the changes which might come, think. Now, I teasered enough – I’m going to write about that soon, in a new blogpost. So that you get even more curious about the next post to come: We found some really nice and open people and spent the afternoon with them. But, it was a quite frustrating way to get there.

Talking about ways. This is the route, we took through Northern Ireland: